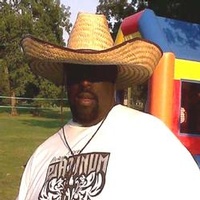 On Wednesday June 13, 2017 Mr. Galand Terry Cruell, Sr. saw the light at the end of the tunnel he was welcome by his Angels.

On August 13, 1970, a handsome baby boy was born to Lewis and Easter Cruell in Tulsa, Oklahoma and they affectionately named him, Galand Terry Cruell. He was the youngest of four boys born to this union, Denver, Kevin & Stanley.

He accepted Christ at an early age at the North Peoria Church of Christ of Tulsa. Galand was raised in Tulsa, Oklahoma and received his formal education from Tulsa Public Schools attending, Douglas Elementary, Anderson Middle School and McClain High School.

In 1996, Galand met Shemeka Taylor of Tulsa and they wonderfully spent twenty-one years together. They couple were blessed with three sons, Carlos, Galand, Jr and Gayveon. He was a loving father, confidant and friend.

Galand in his spare time enjoyed hanging out with his friends and family. He was the life when it came to joking and ragging. To those that were close to him he gave all original nicknames. Galand spent lot of his spare time restoring cars. Galand was preceded from this earth by his father, Lewis C. Cruell; mother-in-law, Annie L. Taylor.