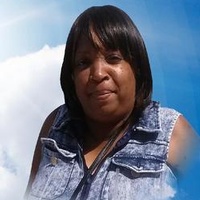 On July 25, 1959 in Tulsa, Oklahoma, Betty Holmes and Robert Washington welcomed a beautiful baby girl into the world whom they named Sandra Kaye Holmes. Affectionately known to family and friends as Sandra Kaye.

Sandra being raised in Tulsa, Oklahoma attended Tulsa Public Schools graduating from Booker T. Washington with the Class of 1977. She later attended Vocational School to become a Dental Technician. She then became employed with Flud Dental Laboratory for over 35 years.

Sandra accepted Christ at an early age while attending Morning Star Baptist Church. She eventually became a member of the Sanctuary Church where she served on the usher board and was faithful and dedicated until hear health began to decline.

Sandra was the loving mother of two beautiful children Marico “Rico” and Jemica Holmes. She later reunited with her “first love” Ronald Harris and on September 3, 2011 they were joined in Holy Matrimony until her demise on May 18, 2017.

Sandra’s life was always centered on her children husband, and grandchildren. She also spent lots of her time reading, traveling, hanging out with brothers, sisters and family members.

On Thursday May 25, 2017 in Tulsa, Oklahoma Sandra Kaye Holmes — Harris made her transition to Eternal Rest. She was preceded in death by her mother, father, grandparents, brothers, Dr. Roy Barnett and Robert Holmes.