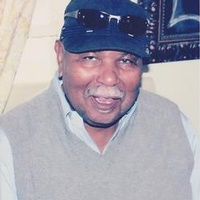 You may pay your respects and bring floral deliveries on Friday from 4:00pm til 6:00pm at New Jerusalem Baptist Church
3427 N. Birmingham Ave 74110.

Troy Homer Rice was born October 5, 1933 in Tulsa, OK to Louise Millet Rice and Homer T. Rice. He was the second child born to this union. Troy grew up in Tulsa and graduated from Booker T. Washington High School in 1951. In 1952, Troy married his high school sweetheart, Mable Rogers. To this union three daughters, Karen, Denise and Gina were born. Troy was a family man and spent his life providing for them.

Throughout the years, Troy was employed by Tulsa Country Club,
F & M Bank, Braden Steele and Optimus Corporation. A dedicated work ethic led to a lifelong friendship with the Harold Lewis family. Troy’s pastimes were filled with BTW football games, viewing PGA events, and as Mable always said watching “anything with a ball.” He also enjoyed listening to the sounds of blues, R&B and jazz.

Troy devoted his life to fulfilling the wishes and desires of his wife, Mable. She was his support and partner throughout their sixty-four years of marriage. He did his best to grant her every wish, no matter how small or large. Troy’s mission was “to make it happen.” The road between Lansing Pl and St. Simeon’s was a well worn path.

In Troy’s later years, he joined the Metropolitan Baptist Church. His daughters and their families soon followed. Troy enjoyed father-son bonds with his son-in-laws, Bobby and Chris. Through the years, the entire family has enjoyed numerous OU football and basketball games, cookouts, and family road trips. Troy’s grandchildren were his source of pride and joy. When they were born, he said, “finally, I have some boys.” Troy was blessed with three grandsons and three great grandchildren.