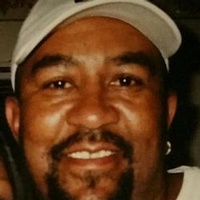 Gregory Story Begins…
On, November 9, 1953 in Louisville, Kentucky a bouncing baby boy was born to Ardania Bennett and George Leslie. They affectionately named him Gregory Stewart Simms. Greg attended Louisville Male High School and was recruited by Elizabethtown Community College to play for the Baron’s basketball team as their starting forward.

With the blessing of being raised in a loving, Christian home, Gregory accepted Christ at an early age at and was baptized at Trinity A&E Baptist Church.

In 1975, he married Edna Curry and moved with his wife and step-son, William, to Tulsa, Oklahoma, where their family grew with the addition of two daughters, Kelly and Terra. Greg spent over 17 years faithfully employed at Amoco before making the move to The City of Tulsa, where he worked in Water Treatment for nearly 16 years.

Greg was an avid fisherman and hunter. He enjoyed basketball, football, camping and all things music. His sense of humor and larger than life presence is what drew people to him, but it was his compassion, loyalty, and dedication to friends and family that kept people close.

Greg leaves to mourn his passing, yet cherish his loving memories a devoted and loving wife, Edna; his two daughters, Kelly and Terra; a step-son William; his beautiful mother, Ardania Bennett; two brothers, Kerry and Donald along with a host grandchildren other relatives and dear friends.
“When caring truly matter, DYER cares.”