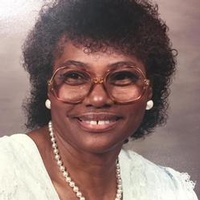 On Tuesday morning at 10:24am at Heritage Villa in Bartlesville, Oklahoma, Mother Parthenia M. Andy 93 folded up her tent and moved up stairs with her maker”.
Her services will be Saturday 12:noon in the New Degree Praise Center 1920 North Kingston Pl. Tulsa, Oklahoma. Burial will follow in Evergreen Cemetery at Gibson Station, Oklahoma.

Pathenia Mary Andy Parthenia Mary made her grand entrance into this world on November 14, 1923 in Porter, Oklahoma into the loving arms of her mother, Estell Hawkins. Estell later met and married Paul Taylor, who affectionately became her father and loved her as his own. Parthenia was the oldest of three children, Shirley and Paul Jr. Parthenia was lovingly known by Pat to close friends and family.

The family relocated to Tulsa, Oklahoma where she attended Tulsa Public Schools. Pat met and married Fred Lewis and to this union three beautiful children were born Carol, Fredrick, Sr. and Keith. This union was later dissolved.

Pat in return met William Andy, Sr., In 1961, and the couple decided to relocate to Kansas City, Missouri where they would live for 43 years. She would happily marry in 1962 a love story that would last for the next 48 years. The couple then became a blended family of eight children.

In 2005, the couple relocated back to Tulsa, Oklahoma and united with New Degree Praise Center under the leadership of Bishop Q. L. and First Lady Yvonne Bell. They both loved the Lord and doing his work. Pat was committed in the service of the Lord and work in many capacities such as, Church Mother, member of the choir and a influential member of the prayer team. Although God called William home in 2010, Pat continued to fulfill her duties as her church needed until her health started to decline.

In her spare time Pat loved to shop, travel, to create arts and crafts, spend time with her family and friends.