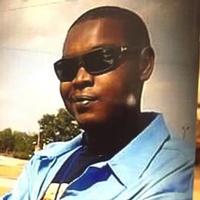 On December 9, 2016 “Julius I. Templeton was welcome
by angels from his earthly house to his new home ”

On September 17, 1991 to Ernest Templeton and Shelia Jackson Johnson were blessed with a handsome baby boy. He was loving named Julius Irving Templeton. Julius was lucky because he also had a man in his life to be a father, mentor and friend, Mr. Joe McLemore.

Julius Templeton attended Tulsa Public Schools systems from elementary school at Hawthorne Elementary, where he was a member of the Ambassador Choir Group and a proud member of Boy Scout Troop #127. Later attending high school at Raymond S. McLain High School graduating in the Class of 2011. Julius attended OSU-IT in Okmulgee, Oklahoma to learn culinary arts. During this time he worked at Lucky Sam’s Store and Subway Restaurant where he was a “Sandwich Artist”.

Julius was a ladies’ man and was loved by them all. He was blessed with a son, Matthew. Matthew was the love of his life and he fought hard to obtain full custody of him to ensure that he would be raised by a man…. His father.

Julius was a loving family man who enjoyed cooking, entertaining family and friends, music, dancing and living life to the fullest by himself. He could play a mean video game. He loved to wear different kinds of stacking caps. He was an outside of the box dresser if you know what I mean.
He was definitely a caring father, son, brother, and friend to many. He cherished and adored his son. He enjoyed life and he brought immeasurable joy into the lives of his family and friends. Waiting for Julius at Heaven’s Gate was his grandparents; Julius Celestine and Evelyn Jackson Brooks and his father’s parents Ernest Templeton and his great grandmother Leanna Roberts and one aunt; Jolanda Green, his favorite aunt.

Julius leaves to cherish his memory his mother, Shelia Johnson; his father, Ernest Templeton; his son, Matthew Reeves of Tulsa, Oklahoma. his siblings, Eric(Kimberly) Johnson Jr. of Tulsa, Oklahoma; Joseph (Monique) Kennerly, III of Vilseck, Germany; Curtis Wayne Templeton and Donald Templeton of Tulsa, Oklahoma. Grandmother Mary Templeton of Tulsa, Oklahoma; Aunts, Calissa Jackson of Wewoka, Oklahoma; Dr. Linda “L J” Jackson of Oklahoma City, Oklahoma; Yoshunnda Chom of Wichita, Kansas; Cassandra (Randy) Markham, Rhonda Templeton. Uncles, Ralph (Monica) Templeton and Darryl Templeton. his first cousins, Latisha Wisdom, Orland Jackson, Lonnell Alexander, Larufus Kennerly, Shaqualla Alexander, Creante Gray, Keausha Green, Darricka Gray, Rickey Green, II, Darriesha Gray and a host of other cousins, family and friends. The bond that Julius shared with his cousins is a bond that will never be broken. See you soon my son, father, brother and cousin. We will love you to infinity and back. To Mr. Joe Mclemore we would like to express our gratitude for being a good friend and life long mentor to Julius from childhood to manhood.