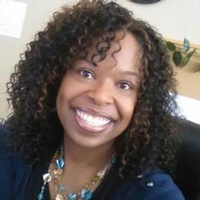 ” A Beautiful Person ”
On June 9, 1979, a Beautiful Baby Girl was born in Sapulpa, OK to Rickey and Joyce (Montgomery) Bruner. They affectionately named her, Misty LaShawn.

Misty joined Church at an early age at Calvary Baptist Church, under the leadership of Rev. Ervin Ruth and later joined the Philadelphia Seventh-Day Adventist Church, where she continued to work diligently in the Church, as Youth Choir Director, Choir Member, Vacation Bible School Teacher, Feeding the Homeless, anywhere she was needed. She served as the Oklahoma Youth Federation Secretary for the past 5 years.

Misty attended Washington Elem. School and Graduated from Sapulpa High School in 1997. She was a member of the Lady Chieftains back-to-back State Runner-up Team under Coach Tina Thomas. She was an All-Academic and All-State Player, and acquired the nickname of “Mound of Rebounds”. She continued her Athletic and Academic Education at Seminole State College on a Full Basketball Scholarship. She later obtained her “Bachelors Degree’ from the University of Oklahoma and went on to receive her “Masters Degree” from the University of Phoenix.

Misty was a “FANTASTIC MOTHER”, to her two Sons, Jaylon – 17 and Doni – 12. She was present at the Schools, PTA, Booster Club, and Sporting Events. Wherever her boys were she wasn’t far behind.

Misty had the Biggest, Loving Heart and Helped Anyone and Everyone she ran into. She was a Foster Mother to many, many, many – babies and children. (Black, White, Purple, Green, Orange) it didn’t matter to her. She had a way about her, that just Blessed those Children. She made Positive Changes in their Lives, treating everyone of them, like her own. She also Coached Several Little League Basketball Teams, over the years.

On the early morning of Monday, October 24, Misty peacefully surrendered to her Master’s Call, at the Young Age of 37, and dozed into a Peaceful Rest.