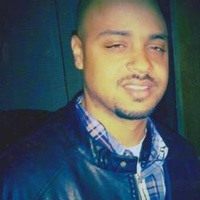 Reflections of a Beautiful Life…

A beautiful and gifted baby boy was born on November 12, 1977 to Floryda Sanders and Keith Lyons. They named him Bryan Keith. Bryan was such and outgoing child who loved to laugh and loved his family. He soon built and unbreakable bond with his stepfather, Bryan Rowe. As a child, he enjoyed his time spent with the youth ministries. He later became an active member in his church, St. John Baptist Church by participating in the youth choir. He was also active in school. He played football and basketball for Hamilton Middle School; he then attended Rogers High School for his first three years of high school and went on to graduate from McLain High School in 1996. He continued his educational career by exploring the collegiate experience at Seward County in Liberal, Kansas where he became the manager of their basketball team.

Bryan was overjoyed with excitement when his beautiful daughter, Delize Nekole Sanders came into this life on August 31, 2014. Bryan was a kind soul and was blessed with a big heart. He would do anything for his family and for anyone he considered a friend.