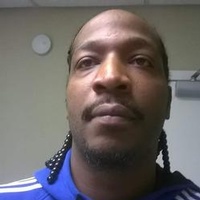 “Angels were dispatched to earth to bring the soul of Mr. Shimon R.”Little Daddy” Jones to his new home on October 18, 2016 .

On April 21, 1975, Ronnie Jones and Ruby Pearson were blessed with a handsome baby boy who would be named Shimon Rashiek Jones. Shimon was raised in Tulsa, Oklahoma and attended Tulsa Public Schools. During his life he worked at Sonic and Tulsa Southern Nursing Home both as a cook. He also found gainful employment working as a bouncer at local night clubs.

Shimon had a heart of gold. He had a big heart for his family and for people in general. He was an awesome father and great man to all of his nieces , nephews, cousins and friends and anyone he came in contact with. Most people would call him friend. He loved his children more than anything in the world. They were his everything. Shimon made everyone around him feel loved. He loved to talk and have a good time with everyone in conversation. When you talked to Shimon you felt like you mattered

Shimon’s life was consistent with body building and being healthy.His hobby was playing basketball and he could really play. His other favorite past time was family gatherings and eating good food. At family gatherings, he would get loud and encourage everyone to have fun. Being wit his homeboys and his friends were his joy. He will leave a lot of memories that will never be forgotten but forever engrained in our hearts and mind.

His final farewell will be Friday, October 28, 2016 at 1:00pm at
New Jerusalem Baptist Church with Pastor Sean A. Jarrett as the Eulogist.

His final resting place will be Crown Hill Cemetery