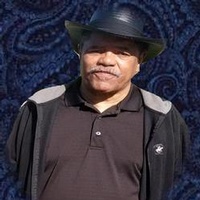 Mr. Billy Joe ” Cadillac Man ” Burks transitioned from this life on October 17, 2016. Celebration of Life: Saturday, October 22, 2016 Paradise Baptist Church. Pastor Anthony Folks-Eulogist.
On April 14, 1947, at Moton Memorial Hospital, Milton and Clara Burks welcomed a son, Billy Joe Burks. who would be the youngest child born to this union. Billy accepted Christ at a very early age. He was baptized at Paradise Baptist Church by Rev. Jackson. Growing up in Tulsa, he attended Charles Johnson Elementary, Carver Junior High and was a member of the Booker T. Washington Class of 1966.

A few years after high school graduation, Billy as everyone called him enlisted in the United States Army from 1969 -1972. He was honorably discharged in 1972, as a Rank 4 Cook. This is where he developed a heart for cooking. He started a career with the City of Tulsa. He worked at the Tulsa Convention Center until his health prevented him for continuing to work. However, he was not ready to stop his career with cooking. He served as cook at the Salvation Army Shelter.

Billy met and married Eddie Frances Jennings and to this union a son was born, Billy Joe Burks Jr. which end in divorce. He later met and married Maron Marshall and to this union three children were born, Derrick, Urshala and Kemuel, this union was dissolved. However, never giving up on love he met Yolanda “Tisha” Platt and they proudly welcomed into the world two children, Meisha and Chantz Burks.

Waiting at Heaven’s gates to receive him were his parents, Milton and Clara Burks, his brothers, Elmarvin, Milton and Hudson Burks.

He is survived by his children, Billy Joe Burks, Jr., Derrick, Urshala, Kemuel, Meisha and Chantz Burks all of Tulsa, Oklahoma. His sisters, Opal Server of Tulsa, Oklahoma and Charlotte Burks of Dallas, Texas.Thirteen grandchildren, one great grandchild. A special sister in law, Karmen “Sally” Palmer who was a friend to the end. Along with a host of cousins, nieces, nephews and friends.