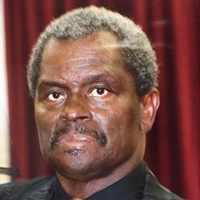 Wilbur Hamilton (aka Skeet) was born on May 2, 1949, to the late Alexander Hamilton Sr. and Lillian Hamilton. He was one of six children born to this union.

Wilbur was raised in Detroit, Michigan. Where he grew up with the love of his life Joslyn Davis. He attended Clintondale Schools where he graduated in 1967. He was drafted to the U.S. Army serving his country during the Vietnam War being discharged with full honors. He married his childhood sweetheart, Joslyn in 1969. The couple was blessed with six beautiful children, Corey, William, Roslyn, Brian and twins Ralisha and Raphael.
In the early 1980’s, Skeet moved his family to Tulsa, Oklahoma where they turned a new leaf on life and new humble beginnings. He was a loving husband, father and grandfather. Dedicating his life to family, Skeet was a mans man. He was a jack of all trades and could do anything.
Wilbur professed his love for Jesus Christ. He joined Gospel Tabernacle C.O.G.I.C. under the leadership of Elder J.W. Ballard. He serves the Lord to the fullest capacity as a Deacon. If you ever needed anything he was there. He loved and instilled the same love and wisdom in those he came in contact with him. He loved people, he never met a stranger. He loved to play chess, “Brother Johnson the chess game is not over.”
On October 15, 2016 he gained his wings and surrendered to the Master’s call. He reunited with his wife Joslyn Hamilton, parents, Alexander Sr. and Lillian Hamilton and three siblings Carolyn, Richard, Alexander Jr. and his son Corey.
He leaves to cherish his memories and to continue his legacy; daughters; Roslyn Hamilton and Ralisha Hamilton; sons; William, Brian and Raphael Hamilton; Eight beautiful grandchildren and one great, great grandchild on the way along with a host of nieces, nephews and other relatives and friends.
“When caring truly matters, DYER cares.”