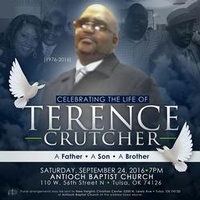 Mr. Terence T. Crutcher 40, of Tulsa, Oklahoma transitioned from time into eternity. He has now received his “crown of righteousness”

Terence Crutcher was born on August 16, 1976 at St. Francis hospital in Tulsa, Oklahoma to Joey and Leanna Crutcher. He was the third born of his siblings and came into the world 3 minutes before his twin sister, Tiffany. As a child, Terence loved to sing, however, he was often too bashful to perform in public. He overcame his shyness and began to share his talents by singing in church and local choirs and in his late teens.

Terence attended Central High School and graduated in 1995. He later met Frenchel and together they had three children. Terence was a loving father and was very involved in his children’s life. He had a big heart and a great capacity to love his children, family and everyone who came into his life. His mother summed it up best when she described him as her compassionate son.

Terence was born into a musical family and decided to follow his passion by enrolling in Tulsa Community College where he studied Music Appreciation in order to formalize his trade and further his opportunity in the Arts. He was a member of New Heights Christian Center where he attended for over 25 years and sang in the church choir. In addition, he was a part of the Gospel Music Workshop of America, Tulsa Chapter. Terence used his voice as an instrument to praise God every time he had an opportunity. Terence also enjoyed cooking and often invited family and friends over for cookouts and holiday dinners.

On September 16, 2016, Terence’s life came to an untimely end. Proceeding him in death were his brothers Lamonte and Joey LaRon Crutcher. He leaves behind to mourn; his mother and father, Joey and Leanna Crutcher; his siblings: twin sister, Tiffany Crutcher and brother, Darayle Crutcher; his companion of 16 years, Frenchel Johnson and 4 children, Imani Williams ( 16) , TyKiaha Crutcher (15), Tyjuane Crutcher (12), Terence Crutcher Jr ( 4) , adopted son Tyler Johnson (17) and a host of nieces, nephews, cousins, aunts, uncles and friends.

His final resting place will be Monday, September 26,2016 at
Green Acres Memorial Gardens

They may also be delivered to Antioch Baptist Church on
Saturday, September 24, 2016 beginning at 3:30PM