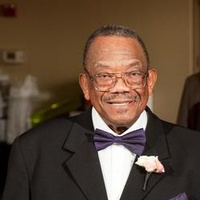 Mr. James H. Nash Sr. of Ardmore, Oklahoma heard the voice of the Lord calling him from labor to reward on Saturday, September 17, 2016.
His journey on earth came to an end when the Commander in Chief of the Universe relieved him of his earthly duties.
He whispered and said ,Servant, your work is now complete!

Mr. James Harrison Nash, Sr.
“A Journey through His Life”

August 02, 1933, what a surprise!!! A twinkle in the eyes of David and Almeady Nash became a reality. On that day in Ardmore, Oklahoma a handsome baby boy was born and they named him James Harrison Nash. He was the 4th of 10 children. James’s educational endeavors began at Dunbar school and then he attended Douglass High School graduating with the Class of 1951. He was a proud Douglass Alumni. James understood the need to further his education so he attended Philander Smith College in Little Rock, Arkansas where he graduated with a Bachelor of Science in Biology.

James always had a heart to serve. He was the true definition of a “sacrificial servant” Therefore, he enlisted in the U.S. Army to serve his country during the Korean War. Upon completion of his tour of duty in the U.S. Army, he returned to Ardmore and was employed as a biologist at the Samuel Roberts Noble Foundation where he served for 29 years.
James also worked in the laboratory at the Uniroyal Tire Plant until he was asked to work as the household overseer and event planner for Carrie Little. James’ desire to help others and continue his community involvement landed him jobs as the Director of the H.F.V Wilson Community Center and as Chef for the Gloria Ainsworth Child Care Center until his health forced him to retire.

James saw a sparkle in his eye by the name of Lucille G. Anderson. The two were married on October 21, 1960 and remained married for 43 years. They were blessed with 5 children (including a set of twins). James was a wonderful husband. He took care of his wife and worked hard to provide so she could have everything she needed and wanted. He was an exemplary father. He always provided for his children and made sure he attended their activities. He instilled in them many positive attributes such as respect, compassion, love, forgiveness, and perseverance. Most of all, he modeled them daily! James worked extremely hard to provide a way for all 5 of his children to graduate from college. This is an outstanding accomplishment

“Mr. Fantastic” as he was referred to by friends and family, was an inspiration to everyone whose path he crossed. He never met a stranger! He was a genuine, loving and kind-hearted man. He was a part of everyone and everything whenever he was needed. Despite what was going on in his life, he always exhibited an attitude of gratitude. He never complained. James was a true “gentleman” at all times and courteous in speech. He was an integral part of the Ardmore community. He served the Ardmore School Board for 25 years and was the first African American to serve as President. He served in various positions for the Douglass Alumni Association and displayed the “Dear Ole Douglass” spirit everywhere the opportunity presented itself.

His Journey Is Now Complete