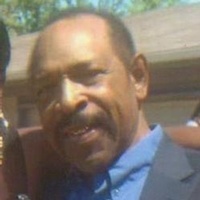 Mr. Charles Liggins 74 of Tulsa, Oklahoma
joyfully entered the gates of Heaven from St. John Medical Center
with his loving wife and family by his side. Services: Saturday June 4, 2016 at 11:00am In the Sprit Christian Church
1020 S. Garnett Rd. Burial: Rolling Oaks Cemetery Jenks, Oklahoma.

Charles’s Life Journey…
Charles Liggins was born in Beggs, Oklahoma on July 18, 1941. He was the son of the late Mary Banks and Albert Liggins. Charles was the second child of the four children born to his parents, Emmanuel Banks, Richard Liggins and Marjorie Mapp. He was preceded in death by both brothers.
Later relocating to Tulsa, Oklahoma, he was educated through the Tulsa Public School System graduating from Booker T. Washington High School.
Charles was machinist for the Williams Center of Tulsa for over 15 years. Charles was a talented musician playing the bongos along with an array of other types of drums. He also enjoyed playing dominos in his spare time.
Charles met Tammie Rentie of Tulsa in 2010 and joined her in Holy Matrimony on September 4, 2012 in Tulsa, Oklahoma. The couple then shard her beautiful daughter, Montoya Rentie.
Charles received the sound of the Heavenly drum and was beckoned to eternal rest on Sunday May 29, 2016. Charles is survived by a loving wife, Tammie Liggins; step-daughter, Montoya Rentie; his sister, Marjorie Mapp of Guthrie, Oklahoma; mother-in-law Agnes Madden; four sister-in-law’s, Lisa Rentie, Sherri Rentie, Sandy Dabney and Ivory Liggins; three brother-in-law’s, Mark Madden, Michael Rentie and Eric Rentie and a host of other relatives and friends.