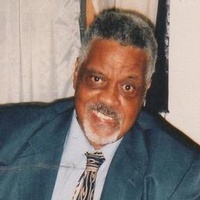 The trumpet shall sound and we shall behold him! On Saturday Morning, Mr. Walker departed from this early home and transitioned to the celestial shore.
Service:Saturday, April 16, 2016 at 10:00am New Jerusalem Baptist Church.

On December 15, 1948, Christopher Walker, Sr. was born to Rev. Lawrence and Josephine Walker, Sr. in Haskell, Oklahoma. He was the fifth child born of seven sons. Lawrence, Joe, Lana, Gene Raymond, Leonard and Verdell. They were known to many as the “Walker Boys”.

Christopher along with his brothers were raised in Haskell, Oklahoma attending Haskell Public Schools graduating from Booker T. Washington in 1966. He along with his brother Leonard Walker were known as the Walkers that put the Haskell Haymakers on the map leading them to the State Championship in the 1965-66 school year.

Upon completing high school Christopher relocated to California where he remained for a couple of years before moving to Tulsa, Oklahoma. He found gainful employment at McDonald Douglas for twelve years before becoming an owner/operator of the Walker Brothers Construction Company which was owned and operated by six of the seven brothers. He later owned/operator the Walker Brother’s Landscaping Company accepting contractual work in the Tulsa area. His health began to fail and he was forced to retire in year 2000.

Being raised in a Christian home Christopher became affiliated with love and the value of Christ in one’s life. He was baptized at an early age at the Simmons Chapel of Haskell, Oklahoma under the leadership of Reverend Martin. After relocating to Tulsa he joined the St. Paul A.M.E. of Tulsa, Oklahoma under Rev. A.L. Williams. Finally he later reaffirmed his faith and joined Bethlehem Star Church under the leadership of Rev. James Johnson.

Christopher met Donna (Donnie Rose) Nash-Turner and on March 9, 1981 they were joined in marriage sharing two sons, Marcus and Tommy Nash who he loved as his very own. The couple was blessed with two more beautiful children to this union, Joshua Walker and Sarah Christina Amanda Josephine Walker.

On Saturday April 9, 2016, Christopher peacefully surrendered to the Master’s Call and dozed into eternity. He was preceded in death by his parents, Rev. Lawrence and Josephine Walker, Sr.; his sons, Christopher and Andre; two brothers, Lana and Gene Raymond.