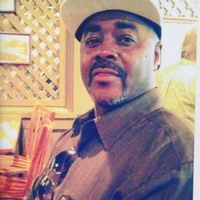 Early Tuesday morning, the Heavenly General sent one of his best and toughest soldiers his marching orders to rest from his labor.

Mr. Sydney Patrick departed from his earthly tabernacle and transitioned into eternal rest.

Please have all floral arrangements sent to New Jerusalem Baptist Church by Friday, April 08, 2016 between 3:00pm – 6:00pm or
Going Hard For Christ Church by 9:00am Saturday.

” AS WE REFLECT ON A PURPOSEFUL LIFE”

A handsome baby boy was born to Donald Ray Patrick and Orene Patrick on August 18, 1958 in Bristow, Oklahoma; he was the first born to this union.

Sydney received his education at Tulsa Public Schools before graduating from McLain High School Class of 1977. Sydney went on to master a trade in Maintenance Mechanics from Tulsa Vocational Technology. He later joined the Army National Guard and shortly thereafter became a dedicated employee for Tulsa Public Schools for 30 plus years

Sydney accepted Christ at a very early age uniting with the Hope of Glory Church where he was taught the uncompromising word of God under the teaching of Apostle Ernest L. Jackson.

Prior to passing, he continued his Kingdom walk at Going Hard For Christ Church under the leadership of Pastor Lawrence Peoples. Sydney “Dad” labored as diligent, committed and faithful servant where he touched countless lives through his distinct worship, brotherly mentorship and fatherly love.

Sydney was a jack of all trades. He was selflessly devoted to helping others. There is no one he came in contact with that he considered a stranger. Sydney was full of energy. His high spirited personality lit the room. He provided immense love to all. Music was his heartbeat and you can see it in every step. Dad was the life of EVERY party!

On April 5, 2016, God said, RISE and instantly just as the day he was born on the assigned day in August, He was born again only this time in Heaven. He was preceded in death by his sister, Carla and his brother in law Wesley.