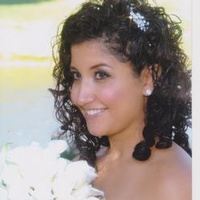 Early Tuesday morning, with her family by her side, Mrs. Lupe Woodard heard the voice of the Lord calling her to eternal rest.

He said,” My Child, you fought a good fight, you finished the race and you keep the faith.”

She peacefully answered the call and transitioned to her heavenly home.

Lupe was born on October 31, 1981 in Denver, Colorado to Juana Coronado and Jose Savedra. As a little girl, she enjoyed dressing up in princess dressed and completing her look with her older sisters’ makeup. At the age of nine, Lupe moved to Norman, Oklahoma. Lupe’s passion were playing cello, playing basketball, cheerleading and dancing. In 2000, Lupe graduated from Norman High School, then attended the University of Central Oklahoma and the University of Oklahoma. She majored in English.

In October 2005, Lupe and Brian were introduced during OU/Texas weekend. Lupe met the love of her life in Brian Woodard. After college, Lupe began working at OU Medical Center as a surgical tech. She always ad a love for the medical field and loved helping doctors saves lives.

On April 1, 2008 , Brian and Lupe were engaged. They located to Owasso, Oklahoma and married August 22, 2009. Later that year, they were blessed with Isabella Rae. In this moment, she was ignited with a new passion- motherhood. Lupe was an exceptional mother. Two years later, Brian and Lupe were blessed with Ava Enise.
The Director of Grand Central Kids, the daycare that Bella and Ava attended, witnessed Lupe’s gifts for understanding how children needed to be taught and loved. These gifts earned her the nickname
“Baby Whisperer.” In 2013, Lupe and Brian were blessed with their child, Brian Anthony II (Brison).

Lupe leaves to cherish in her memory ; a devoted husband Brian, their children, Isabella, Ava and Brian II. Her parents Juana Coronado and Jose Savedra; siblings, Robert Coronado, Janie Lark (Jeff),Raul Coronado (Vicky), Frances Franco (Martin), Rosa Paige ( Andrew ) , Julie Loya (Joel), twin brother, Joey Coronado. Her father and mother-in-law Bobby and Denise Woodard and brother-in-law Eric.
She leaves behind many nieces and nephews who adored and looked up to her , as well as numerous relatives and friends.

Memorial Services for Mrs. Woodard will be Saturday, April 09,2016 at 2:00pm at Metropolitan Baptist Church

Family and friends who wish to express love and support for Brian and his children may do so by making a financial contribution towards the kids educational fund in lieu of flowers.
Education is of the utmost importance to Brian and Lupe.
Funds may be mailed to or given to Brian Woodard at the Memorial Service.

To those who truly wish to send flowers, please have them delivered to Metropolitan Baptist Church by 1:00pm on Saturday, April 09,2016.