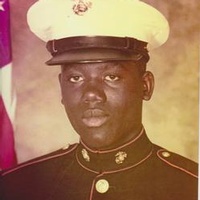 His services will Friday, April 1, 2016 at 11:00AM at the Greater Cornerstone Baptist Church 5610 South 41st West Ave South Haven, Tulsa,Oklahoma 74110 with Rev. John Derrick Williams as the Eulogist.

Visitation and Floral Deliveries will be on Thursday 4:00pm until 6:00pm at Greater Cornerstone.

Eddie was born to Bessie and Leon Mitchell on July 3rd, 1957 in Osceola, AR. He was the first of 10 children born to Bessie Mitchell-Woodson. Professing Christ at an early age, Eddie was active in several churches in his lifetime, the last being Greater Cornerstone Baptist Church. Eddie graduated from Osceola High School in 1975, and soon after joined the US Marine Corps.

In 1973 he met the love of his life Linda Williams and On October 27, 1977 they were joined together in holy matrimony and to this union of 36 years these five children were born: Shannon Mitchell-Horn (Leo), Eddie Mitchell, Jr (Shirley), Terrance Mitchell (Melody), Alexis Mitchell-Ferguson (William), and Venobia (baby angel).Eddie also has another daughter named Latrice Green who resides in Cape Girardeau MO. Eddie relocated to Tulsa, OK in the mid 1980’s where he fine-tuned his auto detailing skills ultimately leading him to open his own detailing shop, Mitchell’s Car Care in Claremore, OK, where he worked for the last 26 years.

Eddie was an avid basketball fan and played in intramural leagues until around age 40. He was handy with mechanics,with a smoker and a barbecue grill. Being the oldest brother left to care for younger siblings while his mom worked evenings, Eddie was the primary caregiver and chief cook. Unfortunately, Eddie never really learned to juggle playing basketball across the street in the neighbor’s backyard with frying chicken back at home. Oh the chicken he would burn! He made up for it, though, by going fishing and providing a good meal when his siblings lived in fear of another beans and cornbread supper. The only thing Eddie enjoyed more than fishing, was EATING fresh caught fish. A favorite family memory involved a surprise birthday gift from his children in 2012. They all pitched in for a flat bottom boat and troll motor. Eddie was so overcome with joy that he cried and hugged everybody — twice!

Eddie was known for his trademark smile and for giving rough bear hugs. He said what he meant, and he meant what he said. He was especially gifted with certain words that we cannot mention here. He was faithful to attend family reunions on all sides of the family, bridging generations across family lines.