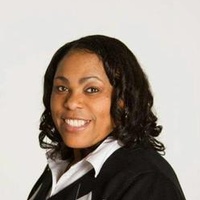 She had a real flair about her very thoughtful, gracious and giving. A young lady who loved hard, she loved her family first and foremost, husband, mother, sisters, (step-children) and friends even those who she felt did not love her back. She glowed, and had a radiant smile, everyone knew that smile. Tamara was born: Tamara LeShawn Ragsdale alongside Tammy Dion Ragsdale at 5lbs.-3oz. on October 28th 1967, a full 3 minutes apart, she was the younger twin born to Charles Lea Chester and Joy (Joyce) E. Ragsdale. She was a handful from the moment she entered this world. Tamara would share identical dreams with her sister. She was the leader, and a very strong person. Tamara could almost do anything.

She entered Pre-school at the age of three and later attended Emerson Elementary School from Emerson she became a student and cheerleader at Carver Middle School. Then she attended Booker Washington High where she was a proud member of the T – Connection Band and graduated with the Class of 1985. Upon completing high school she attended O.S.U. that summer and fall. She left OSU and attended Okmulgee Tech. Tamara put aside school and began a career in Mortgage, this career led her to Kansas City, Missouri.

She later became the wife of Mr. Roy Charles Jones, on June 25th 1994, in Kansas, whom she met while in high school. Tamara’s job would later take her to Texas where she and Roy would make Arlington their home. They lived there from 1996 to 2008. She along with her husband was a member of the Potter’s House in Dallas, TX. Before returning home to help care for her mother. Tamara later found gainful employment American Airlines through Aerotek Industries. While there Tamara thrived and was well known among her peers.

Tamara became ill and had to have major appendix surgery (a huge obstacle in her life). But she was an overcomer. It wasn’t very long before Tamara became ill again, and was diagnosed with Endometrial and Uterine Cancer in June of 2015 and had a successful surgery at the Cancer Treatment Center of America. (CTCA). However, the cancer metastasized to her bones and brain. Tamara NEVER gave up and NEVER gave in. Her faith was STRONG, and UNCHANGEABLE and her belief never wavering. Her transformation was phenomenal “YES” Tamara was “more” than ready. It was amazing to see her worshipping and Praising God, speaking tongue at 2, 3 and 4 o’clock in the morning just giving God the Glory. Although we wanted her to stay, she succumbed to the disease on January 17, 2016 at 2:22 (2=twins with 22 years of marriage) and went to be with her Lord and Savior.