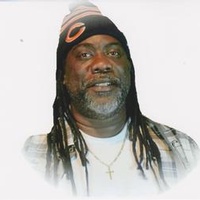 Mr.Roy Eugene “Big 6” Houston of Taft, Oklahoma was taken home to be with our Creator on the morning of Sunday January 17, 2016 at East Star Health Care in Muskogee, Oklahoma.

On July 28, 1968 in Muskogee, Oklahoma God blessed Oma Houston and Henry Island with a baby boy, they named him, Roy Eugene Houston.

Roy attended Moton Public School in Taft Oklahoma, Home of the Panthers. Roy was known for his basketball skills on the court. In his senior years the basketball games with Boynton, Boley and Tallahassee would always need security because the intensity of the game between those schools would have the roof on fire. Roy graduated with “PRIDE” from Moton High in 1986. After completion of high school he attended Grand Prairie Community College. He later moved to Tulsa where he worked two construction jobs for Tulsa Laborer Union Roy also worked for Tulsa Parks and Recreation, and as a cook for Elchico in Muskogee.

In the late 1980’s Roy returned to his roots “Chocolate City” Taft, Oklahoma. In 1989, Roy met the love of his life, Mattie Miller to this union five boys were born, Brandon, Domonic, DeAndre, Kolbee and Ahmad. Roy enjoyed spending time with his boys from football, basketball, hunting, fishing, and grilling. He taught them everything he could about life. Roy loved the Taft family and was a faithful servant to his community from being a volunteer firefighter, and member of the Boynton Farmers Association. He later reunited his relationship with the Lord and attended Wilson Chapel Baptist of Haskell, Oklahoma under the leadership of Pastor Delbert Josie.

He had a passion for cooking, during the holidays he would roll out the big smoker and it was on. Roy was known for his Turkey Legs during Memorial Day Weekend and Barbeques on Junetenth and The Fourth of July. Roy loved to DJ and entertain family and friends and loved celebrating his Birithday. His love for hunting and fishing occupied a lot of his spare time. He loved the wildlife, from running the beagles after rabbits to fishing at the dam. If he came home with a big fish then there would be a “Fish Fry” for the community. One thing about it, his family wasn’t going hungry from duck, deer, raccoon, possum, rabbits, frogs you name it Roy ate it. Roy was preceded in death by his mother, Oma Houston and brother, Brandon Houston, nephew Julius Campbell and their little angel.

On Sunday, January 17, 2016, at age 47 Roy departed this life and entered into eternal rest. He leaves to cherish his memory: his wife of 27 years Mattie Miller: his five sons, Brandon, Domonic, DeAndre, Kolbee and Ahmad; his father Henry (Gloria) Island, all of Taft, OK.; six sisters, Tammy Houston of Abilene, Texas, MarQuieta (Lester) Steele of Dallas, Texas, Luretha Carr and Lisa Clemons both of Tulsa, OK; Carla Neele of Taft, Ok and Kristina Cannon of Thornton, CO; seven brothers, Darryl Houston of Abilene, Texas, Xanthus (Janete) Houston and Sheldon Houston all of Taft, Ok. Cassie (Cynthia) Houston of Dallas, TX. Reggie and Ryan Wilson of Tulsa, OK, John Cannon of Milford Delaware along with a host of aunts, uncles nieces, nephews, cousins other relatives and friends. Last but not least his forever “Chocolate City” family.
His final resting place will be at Blackjack Cemetery in Taft, Oklahoma