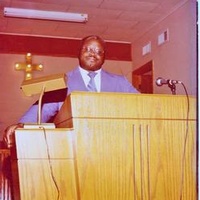 
Dr. Rev. William Roy Parker, 84 was born June 24, 1931 in Jenks, Oklahoma to the late Inez Taylor and the late John Henry Parker, Jr. He departed to be with the Lord on Thursday, December 31, 2015. William was raised by his grandparents John Henry and Addy Parker in Jenks and later moved to live with his mother at the age of 12 in Tulsa, Oklahoma. William graduated from Booker T. Washington in 1949. He met and married his high school sweetheart, Loyce Jean Watson and to their union, six children were born: Ronald, Willetta, Fayetta, Lawrence, Sheran and Regina.

William joined the army and later received an honorable discharge. He was a hardworking man, who worked tirelessly to provide for his family. He worked for the railroad company, Tulsa World, Spartan Aeronautics, and other jobs in Tulsa. After many years of employment, William and his wife started J&R Janitorial Service and other businesses in the Tulsa area. William obtained his Theology Degree to further his education.

A man of faith and belief in the Lord, William accepted Christ as his personal savior at an early age. He accepted his call to the Ministry early in his adult life and continued to serve the Lord for the rest of his life. William was ordained into the Ministry at St. Luke Baptist Church in Tulsa, Oklahoma under the leadership of the late Rev. U. J. Wimbush. He dedicated his life to the advancement of God’s Kingdom with over 60 years of service to the Lord and Savior. During his ministry he served as pastor for several churches in Eastern Oklahoma: First Baptist, Red Bird, OK; Rentie Grove Baptist, Jenks, OK and Mt. Zion Baptist Church, Claremore, OK. One of his greatest accomplishments was the co-founding of Galatians Missionary Baptist Church, Tulsa, OK where he served as pastor for more than 25 years. As a pastor, Dr. Parker accepted his charge to “Preach and teach the gospel of Jesus Christ” to everyone he came in contact. His knowledge of God’s word was immeasurable and his ability to pray and communicate with the Lord was profound. When the song writer peened the words in song, “if I can help somebody as I travel along, then my living shall not be in vain”. William was one whose life so exemplified that philosophical teaching. He was a man who feared God and kept his commandment.

Those left to cherish his memory include his son, Rev. Lawrence Oneil Parker of Tulsa, OK; four daughters: Willetta (Arthur) Walker of Lawton, OK, Fayetta (Floyd) Freeman of Spencer, OK, Sheran Rodgers of Tulsa, OK and Regina (William) Armstrong of Tulsa, OK. He is survived by 18 grandchildren and a host of great and great-great grandchildren. He also leaves to mourn his brother, Lawrence Paul Scott, two sisters-in-law: Cherry Bell Ross of Converse, Texas, Addie Watson of San Antonio, Texas and a host of nephews, nieces, other relatives, classmates, church family, colleagues and friends.