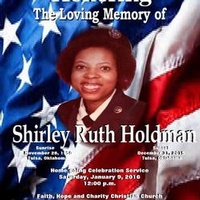 God saw that Shirley was getting tired and a cure was not to be, so he put his arms around her and whispered, Come Home With Me:, with tearful eyes, we watched her fade away. Although we loved her dearly, we could not make her stay. A golden heart stopped beating; a determined spirit was at rest. God broke our hearts to prove, he only takes the best.
A beautiful rose was plucked from our midst; her name was Shirley Ruth Holdman.

Shirley Ruth Holdman, the first daughter of Alice and John Buster Holdman was born the third of eleven children, on November 28, 1950, in Tulsa, Oklahoma. Shirley was preceded in death by her husband, John and her father, three brothers and a sister.

Shirley grew up and attended Tulsa Public Schools, and later graduated from Central High School at the age of 16. She attended Oklahoma State University where she received her Bachelor’s Degree in Economics and Master’s in Education and was also a member of the Delta Sigma Theta Sorority. She accepted Christ at an early age and united with the Church of the Living God Temple #53, under Bishop L. M. Musgrove. She later became a member of her brother’s church, Faith, Hope and Charity Christian Center and remained a member until being called to Glory.

Over forty years ago, Shirley met John Darrington and to this union two children were born, Rachelle Holdman and Mario Darrington. After serving 38 years at AT&T in the asset service department, she recently retired in November, of 2015, and also served 25 years in the Air National Guard were she retired in 2003.

Shirley enjoyed blessing people and would give you the clothes off her back. She was an excellent cook and always wanted the best for anyone who came in contact with her. She was a giver all the way to the end of her journey. Even when her health started to decline, she was still giving. Shirley will be remembered by her family and friends as a genuine person with a heart of gold, warm personality, a concerned and caring person with a beautiful smile who was always full of laughter. She touched so many lives and will be greatly missed.

After a courageous battle with cancer, Shirley departed this life on December 31, 2015, at the age of 65. Though confined mostly to her bed in her last days, Shirley never lost her faith nor became restless or discouraged; she was a true fighter to the day she took her last breath. She will be missed and revered in our hearts forever.

Shirley’s Favorite Verse (John 3:16): For God so loved the world that he that he gave his only begotten Son, that whosoever believeth in him should not perish, but have everlasting life.