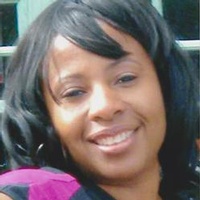 On November 7, 1966, Lonzo and Dorothy Gardner welcomed into this world a beautiful baby daughter and her name would be Teresa Ann Gardner. Teresa would be the only child born to this union and they loved her dearly.

Teresa was educated in Tulsa Public Schools. She attended Bunche Elementary, Marian Anderson Junior High, and Booker T. Washington High School. She was very active in school, she served on Red Cross, Student Council, Class Boards and was the captain of the Elite Section of the T-Connection Band. She was a proud member of the BTW Class of 1985.

In 1989, Teresa Started to work for State Farm, it is there were she met the love of her life, Mr. Curtis Youngblood. On September 1, 1990, they were married. Two daughters were born to this union., Ashley and Bria. A another daughter from a previous relationship also loved and called Teresa , Mom, Rian Chaquinta. All who loved and supported Teresa through her illness.

On November, 30, 2015, Teresa’s heard God’s call and she stepped into glory. She was met by her parents, Lonzo and Dorothy Gardner, sisters, Brenda Pennington and Nita Richardson and niece Tina Richardson and nephew, Marquis Richardson,