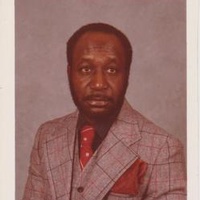 Eugene Harding, Jr. was born March 4, 1943 to Eugene Harding, Sr. and Margaret G. Gordon-Harding. He was the oldest of five children. He was preceded in death by his parents, two brothers and son, Darryl E. Harding.

Gene was raised by his loving parents in Kansas City, MO. He attended Missouri Public Schools and later joined the United States Armed Forces serving in the Vietnam War and Germany. After completion of his military duties Eugene “Gene” was employed with Conoco Oil Company for over 35 years until his health began to fail. He was considered a million mile plus over the road truck driver. In his spare time Gene enjoyed fishing and bowling being a truck driver he loved traveling.

Gene June 30, 1988 to Freda Carter of Tullahassee, Oklahoma and he relocated to Oklahoma to call home.

Mr. Eugene L.”Genie” Harding Jr 72 of Tullahassee, Oklahoma dozed into the tranquil peace of eternal slumber on the morning of Monday, November 23, 2015 at the Veterans Hospital in Oklahoma.