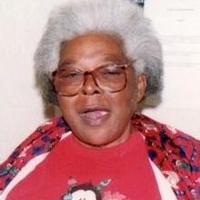 
Juanita Hickman was born to Fannie Mae Tobler and James L. Hickman on July 27, 1932 in Sapulpa, Oklahoma. She was the second of three children. Her siblings were Josephine and Carl.
Juanita graduated from Booker T. Washington High School of Sapulpa, OK after completion of school Juanita attended Home Health classes and became a Home Heath Care Provider for many years. She was also one of the top 10 sellers for AVON for many years. Juanita had a vast list of hobbies but she enjoyed sewing and making pottery the most.

Juanita accepted Christ as her Lord and Savior at an early age and has been a lifelong member of the Macedonia Baptist Church of Sapulpa under the leadership of Pastor Oscar Howard. She served in various capacities such as the Church Secretary and Treasurer. She loved her church and church family her presence will truly be missed.

On the morning of Sunday November 22, 2015, Juanita departed this earthly life to be reunited with her parents and brother who preceded her in death.