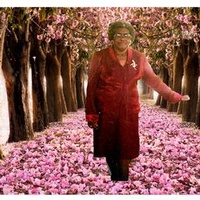 For we know that when this earthly tent we live in is taken down (that is, when we die and leave this earthly body), we will have a house in Heaven, an eternal body made for us by God himself and not by human hands. We grow weary in our present bodies, and we long to put on our heavenly bodies like new clothing … we want to put on our new bodies so that these dying bodies will be swallowed up by life … we know that as long as we live in these bodies we are not at home with the Lord. For we live by believing and not by seeing. Yes, we are fully confident, and we would rather be away from these earthly bodies, for then we will be at home with the Lord. 2 Corinthians 5:1-8

Gussie Mae was born on October 6, 1910 to Mollie Grayson and Solon Davis in Redbird, Oklahoma. Her mother later united with Monroe Marshall in Holy Matrimony and they provided a loving home for their nine children, Hattie, Johnny, Gussie, Sanford, Cora Lee, Arthur, Governor Louie and Frances. Gussie will forever be reunited in Heaven with her parents and siblings.

Gussie Mae met and married David Smith, Sr. of Coweta, Oklahoma and to this union the couple loved and raised eight beautiful children, Robert, Raymond, Roscoe, Rozell, David Jr., Herman, Linda and Jack. She was a loving homemaker and mother. To know her was to love her, her smile, charm, warm embrace and caring heart. She never spoke unkind words. Gussie found good in everyone and in every situation. Her home was a safe haven for anyone. She was the epitome of love. She had a special passion for gardening, cooking and flowers. She loved shopping out of Avon, Fingerhut and Midnight Velvet catalogs. Gussie always had some Avon to give away. She simply had a sweet spirit that just never said, “No”, to anyone. Her graceful charm would enlighten any moment and her sweet and kind spirit will be missed by many who celebrate the fact that she is at PEACE with GOD.

She was a good Christian person, having dedicated her life to the Master’s service at an early age. She has been a devoted lifelong member of Wilson Chapel C.M.E. of Coweta, Oklahoma under her final leadership of Rev. Ruthie P. McKittrick. She served in various capacities or whenever she was needed. She was always willing to do what was needed to be done for the edification of God. Gussie was a giver, she loved bearing Christmas gifts for the congregation and did her best to give everyone gifts on their birthdays. She served as a Steward and lastly, The Mother of the Church she remained faithful until her health failed. Mother Gussie was devoted to her family, friends, church family and her firm belief in God. That faithfulness and belief transitioned her to this graceful age.

Mother Gussie Mae Smith departed this life to abide with the Heavenly Father on November 1, 2015 at the glorious age of 105. She also will be reunited with her husband, David Smith, Sr. and two sons, Robert and Raymond.

She leaves to cherish her memory and celebrate her home going, Five Generations of Family, her children Roscoe of Houston, TX, Rozell of San Francisco, CA, David Jr., Herman both of Coweta, OK, Linda of Lawton, OK, and Jack of Coweta, OK.; four generations of grandchildren, nieces, nephews other relatives and her Wilson Chapel C.M.E. Church family.