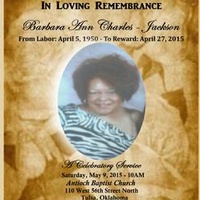 On April 5, 1950, Darnell and Dorothy Charles were blessed with a beautiful baby girl in Coweta, Oklahoma and they named her Barbara Ann Charles. She was the second oldest of five children. She was affectionately known as, “Crazy Horse.”

At an early age the family moved to Tulsa, Oklahoma. She attended Tulsa Public Schools graduating from Central High School in 1968. She graduated from Cosmetology school and traveled the world. She was an accomplished seamstress, cook and artist.

She was a true diamond with many facets and carats. During the course of her journey, you could always count on Barbara Ann to bring life, laughter and celebration. She was known to feed the multitudes. She always told it like it was. Also her comments ” Baba” and “Miss Me With All That.” As a citizen of the Muscogee Creek Nation she was proud of her heritage.

She was a member of New Bethel Missionary Baptist Church and an active participant in the Mission. She leaves a rich heritage and great memories in the heart of her family and friends.

She was preceded in death by her parents, Darnell and Dorothy; four uncles, Troy Hines, Alvin Hines, Alfred Hines and Thomas Hines; two aunts, Jeannie Hines and Alma Watson; one nephew, Alvin Davis; her cousin, Bossie Hines with special tribute to Barbara for the care she provided him. They will be there to greet Barbara Ann on her arrival home.

Barbara met and married Kermit Brown and to his union two children were born, Fonzell ” Manny” and Kimberly Brown. This marriage was later dissolved and she met and married Curtis Jackson.

Ms. Barbara A. Charles-Jackson submitted to the will of the Father on April 27, 2015.

Her celebration of life will be Saturday, May 9, 2015 at 10:00am at
Antioch Baptist Church