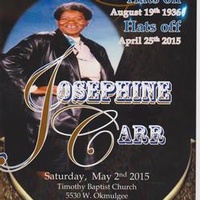 Josephine Carr was born August 19,1936 in Yahola,Oklahoma to Alvin and Willie Bowler. She began her education at Sugar Creek Elementary. At the age of 16 she graduated high school and attended Cosmetology School.

Being very adventurous , she moved to San Francisco, CA IN 1955. She had various jobs from domestic work to cooking and her final job as a School Administrator for Sequoia School in District in California. After her retirement, she moved back to her birth state Oklahoma to spend her grand years with her sister Pearl Brewer and brother Eugene Bowler of Taft, Oklahoma who proceeded her in death. Her brother on April 25, 2012 and her sister May 25,2014. The 25th day seems to be a special day for the three siblings as they all took their final breath on a 25th day.

Known for her love for hats she was a lady with a ” HATatude” …
Not only did she love hats but her love for youth never stopped. When she returned to Oklahoma she became a foster grandparent at Ben Franklin in Muskogee, Oklahoma where she was called grandma. In April the month of her final days she received an award from the state of Oklahoma for her outstanding foster parent participation.

Burial will follow in Doyle Cemetery West of Taft,Okla. You may visit Mrs. Carr on Friday 10:00am til 7:00pm at Alfred C. Dyer Memorial Chapel “When caring truly matters, Dyer cares”