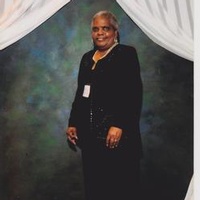 On May 3, 1938 in Haskell ,Oklahoma a beautiful baby girl was born to Rendell and Alta Mae Brewer. They named her Margaret Francis Brewer. She accepted Christ at an early age and later became a member of Redeemed by Grace Church. Margaret grew up and attended school in Haskell , graduating high school at Booker T. Washington High School in 1956.

Margaret worked for Zebco for many years for many years, working her way from production worker to supervisor and night shift nurse. She later went to work for Mr. and Mrs. Baden, who loved her and considered her family.

After 76 seasons, Mrs. Margaret F. Brewer-Ransom harkend to the voice of “Our Lord” saying “Come to thine place of rest” Her Home Going Celebration will be Saturday 11:00am in the Redeemed by Grace Church where the Senior Pastor Willie Lewis, Eulogist.
Burial will follow in Friday Cemetery at Haskell, Oklahoma. You may visit Mrs. Ransom Friday 10:00am til 7:00pm at Dyer Chapel.