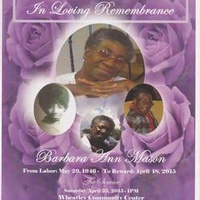 On May 29, 1946 God endowed the earth with one of his most cherished gifts, Barbara Ann Monday. Born to Morris and Hazel Monday in Boynton, Oklahoma, she was the seventh of nine children. Always the life of the party ” Barbara Ann” would invent stories to entertain her siblings and friends. Barbara was a proud student of Phyllis Wheatley secondary school and Boynton High School. She was a bright student that excelled in academics. In addition to her studies, Barbara was great in basketball and track and field. She always led the team in song after every game with ” My Girl” whether they won or not.

Barbara was also a faithful member of First Baptist Church in Boynton where she traveled and sang in the youth choir.

She was united in Holy matrimony to Walter Fay Mason Jr. and to his union four beautiful children were born. Later she united with James Edward Goff and two more precious children were added to her family. She was known as an immaculate homemaker and took pride in raising her children with tender loving care.

Only after successfully raising her children did she enter the workforce. She was a dutiful employee at Braums Ice Cream and Dairy Inc. for over 18 years. She was so beloved by all who knew her and was an exemplary employee. Barbara also was a willing volunteer at Jewel’s Place Daycare. All the children, clients and staff adored her and her hilarious antics.

Affectionately known as “Blue” , which did not exemplify her presence. She was a homegrown comedian and spirit ” up lifter.” Ms. Mason loved to read, solve Sudoku puzzles and travel.She loved the Obama’s but most of all she loved Boynton. She was a true Boyntonite and too her charge as Sergeant at Arms to heart!