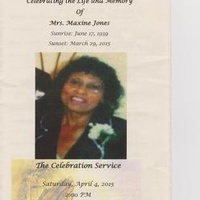 In the year of our Lord and Savior on June 17, 1939 in Sapulpa,OK heaven placed on loan a beautiful baby girl. Her care was entrusted to Jesse Powdrill and Florence (Barnes)Powdrill. The family resided in Sapulpa, OK. After reaching adulthood, Maxine met a wonderful man named Alvin Jones. After a beautiful courtship, they feel in love and were married. Alvin affectionately known as ” Spooky Jones” was known as her other half. The couple remained in Sapulpa, OK and dedicated their lives to raising their children and working hard to support the family. Alvin and Maxine shared 56 1/2 years of marriage before Alvin preceded her in death in October 2014.

Maxine was a faithful member of Calvary Baptist Church and enjoyed spending time with her church family. She was a protective and loving mother, grandmother and great grandmother. She thoroughly enjoyed that role, especially after her retirement from Hissom Memorial Garden, where she was supervisor.

“Shorty” as she was affectionately referred to by her husband spent many a day sitting on the front porch enjoying the beautiful flowers and waving to all the passersby…some she knew and other she didn’t. She was an amazing cook with her specialty known around town being her homemade German chocolate cake which was a staple at almost every family gathering. She lived her life for her children, grandchildren and great-grandchildren who she adored beyond words. She always said, ” they kept her going”

On March 29, 2015, with her family by her bedside, Maxine departed this life and went to be with her Lord and Savior.She was met at Heaven’s gate by her parents, her loving husband, her daughter, Regina Jones, her son, Roger Powdrill, granddaughter Ketra Chiles and grandson Rodgrick “Gucci” Powdrill.