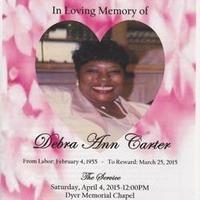 Debra Ann Carter was born to the proud parents of Q.T. and Rosie Lee (Alexander) Carter on February 4, 1955 in Porter, Oklahoma. The family later moved to Muskogee, Oklahoma where Debra lived with her parents until her mother passed.

Debra professed a hope in Christ at an early age. She united with the Mount Pleasant Baptist Church of Porter. She graduated from Carter G. Woodson High School in Tullahasse, Oklahoma. After graduation Debra moved to Oklahoma City. She later moved to West Palm Beach, Florida. She studied culinary arts. After she graduated from culinary school, she began her career as a chef at Denny’s Restaurant and remained with Denny’s for the remainder of her career.

In 2007, Debra moved to Tulsa, Oklahoma. On March 25, 2015, after a long fight, she went home to live with Jesus. She leaves to cherish her loving memory; her son, Brian Patrick Carter of Tulsa, Oklahoma; her sister, Ruthie Lee (Carter) Ball of Tulsa, Oklahoma, a friend of thirty years, Eugene Bynum of West Palm Beach, Florida; her best friend since elementary school, Elizabeth (Parker) White of Haskell, Ok; a host of nieces, nephews, aunts, uncles, cousins and friends.

Services for Ms. Debra Ann Carter 60 a Retired Chief for Denny’s restaurant will be Saturday 12:00 noon at Dyer Memorial Chapel cremation will follow.