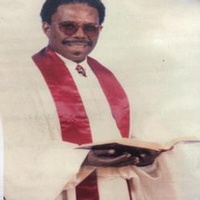 Pastor William T. Erby of Bethel AME Church in Bartlesville, OK transitioned from time to eternity on March 21, 2015 at his home.

On February 10, 1941 a beautiful baby boy was born to William T and Connie Tellis Erby in Atkins, Arkansas. He was the last of fourteen children born to this union.

In 1957, after completion of school, William moved to Tulsa, Oklahoma. He served with the Church of the Living God. Later he united with Galilee Baptist Church where he received his licensed to preach on March 1 , 1968. Shortly afterwards he was asked to travel to Coffeyville ,Kansas to serve a Christian Methodist Episcopal Church. After serving in Kansas, he returned to Tulsa and connected with the African Methodist Episcopal Church. He attended Jackson Theological Seminary Extension School in Little Rock, Arkansas under the leadership of the late Rev. Dr. B.S. Roberts. He was later ordained as an Itinerant Elder.

In 1980, wedding vows were shared between William Timothy and Cleve Erby. With this union came nine children.

In 2007, he received an Honorary Doctorate of Divinity in Human Letters from Harvest Time Prayer and Bible College.

William was preceded in death by his parents, six sisters and five brothers.

Life is but a Stopping Place Life is but a stopping place, A pause in what’s to be,A resting place along the road,to sweet eternity.
We all have different journeys,Different paths along the way,
We all were meant to learn some things,but never meant to stay…
Our destination is a place,Far greater than we know.
For some the journey’s quicker,For some the journey’s slow.
And when the journey finally ends,We’ll claim a great reward,
And find an everlasting peace,Together with the Lord.