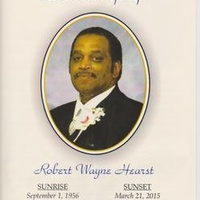 OnT the morning of Saturday, March 21, 2015 Robert surrendered his last breath to our Lord. No longer is his body in any pain or strain. He can now rest his soul.

Robert Wayne Hearst was the seventh child of ten, by his mother Thelma Beatrice Hearst and father, Rev. James Robert Hearst. He was born in Philadelphia Pennsylvania on September 1, 1956. The journey of a great man began to unfold.

Robert attended James Rhoades Elementary School in the beginning of his early education and continued his learning at Overbrook High School, graduating at the age of sixteen. Wasting no time at all, he enrolled in the Army in 1973. After being honorably discharged two years later he joined the National Guard. Soon after, Robert met the love of his life, Antoinette Brody, quickly married her and made her his wife.

In 1984 Robert was employed by the Philadelphia Naval Shipyard for ten years. Upon the closing of the Shipyard, Robert made the big decision to leave Philadelphia in 1994 and to move his family to McAlester, Oklahoma, providing a better opportunity for his future. For 21 years Robert Hearst worked at the McAlester Army Ammunition plant, day in and day out, providing for his wife, sons, daugthers-in-law and grandchildren, not only financially but spiritually, uplifting everyone he encountered in his life. You will be hard-pressed to find anyone ” Pa-Pa Wayne Hearst” did not influence in a positive way.

Robert was preceded in death by his mother, Thelma B. Hearst and father, James R. Hearst.