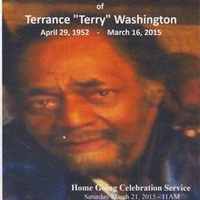 On April 29, 1952 a wonderful baby was born to Ada Bell Clark-Washington and Mitchell Washington in Tulsa, OK. They lovingly named him Terrance Washington. He was preceded in death by his parents.

He was raised in Tulsa, Oklahoma where he attended Tulsa Public Schools and graduated from Booker T. Washington High School with the class of 1971.

On his journey in life , he met and married the love of his life, Connie ” Sier” Washington. His beautiful wife also preceded him in death. He had many avenues of employment. However, the job he loved most was being a Cab Driver. He drove for more than 20 years.

Terrance joined and attended church at Eastwood Baptist Church. This is where you could find him every Sunday until his passing.

After fighting the good fight, Terrance made his transition from labor to refreshment on March 16, 2016.Awaiting his arrival were his parents, his wife, one brother, Alonzo and his sister Florence Ann.

A Celebration of Remembrance for Mr. Terrance “Terry” Washington, 63 of Tulsa, Oklahoma will be Saturday, March 21, 2015 at 11:00am in the Alfred C. Dyer Chapel with The Rev. Jamaal A. Dyer, Eulogist.