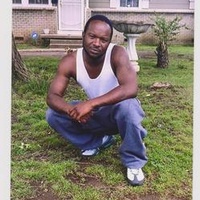 On January 26, 1980. Alvin and Doris was proud to present their beautiful baby boy to the world they named this bundle of joy, Alvin Dejuan Davis. He later received the nickname, of “Dizzy” from family and friends.

Alvin attended Tulsa Public School and was active in sports where he took a particular interest in wrestling. He later went on to receive his Journeyman Management License in Heating and Air.
Alvin accepted the Lord at an early age and was a member of Cornerstone Baptist Church under the leadership of the late Rev. Williams.

Al was a charmer and had a smooth way with the ladies. This charm would lead him to experience one the greatest highlights of his life becoming a father. He loved all of his children and took pride in being called “Dad”

Alvin enjoyed watching sports on T.V., cooking, fixing up old cars and going to the casino. He also had a sense of humor that would drive his family crazy.

On Saturday, March 14, 2015, Al quietly answered his call from his Lord and Savior where he joined his Heavenly family which includes, his father Alvin, Jr.; his grandparents, Mr. Darnell Charles, Mrs. Dorothy Ridge and Mrs. Cowdona Davis; two nieces Roniesha and Raven.
Alvin leaves to cherish his earthly memories; are his parents, Doris (Billy) Davis; seven children, DeKayla, Reality, Maliyah, MaKhai, Loyalty, Nadia and his loving stepson, Dekindrick. Three brothers, Johnny Charles (Tina), Rhochon Charles Tyree Davis; four sisters, Anita Charles, Aneishia (Avery) Anderson, Arlinda Davis and Tylane Cato; two uncles, VIrgil Charles and Sylvester Petty; four aunts, Barbara Ann Jackson, Genivie Charles – Petty, Patricia Powell and Beverly Davis; a host nieces, nephews other relatives and friends. Al will be missed by all, his charm, his high spirits and great sense of humor. But we all know to be absent from the body is to be present with the Lord. “My Brother’s Keeper” I miss you, “Lil Al” so much the last time we spoke was three days before your passing. l loved cutting your yards in the summer. We had a conversation about us going to daddy’s grave together. We were so close nothing on earth could break our bond. We had each other’s back. You reminded me so much of daddy and everyone says I look like daddy so I guess that makes us triplets, we’re all black got the same peanut head. But like I was saying, “I miss you BIG bro.” we shared so many memories together and I enjoyed each and every last one. And now that you are gone to Heaven I will cherish and hang on to them forever. R.I.P. Alvin Love Ya, Bro. Rest On Al, Rest On…
“When caring truly matters, Dyer cares”