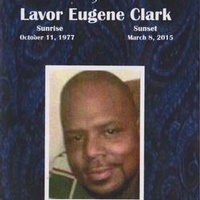 Children are a blessing from the Lord and Brenda J. Clark and Eugene Cook received such a blessing on October 11, 1977. They named him Lavor Eugene Clark.

Lavor was a product of Tulsa Public Schools. He attended Jackson Elementary, Gilcrease Middle School and he graduated from Raymond S. McLain with the class of 1996.

Lavor was a very passionate and loving person. He had a heart of gold and there was nothing he wouldn’t do for anyone. His remarkable love grew once he became a father. The love he carried for his children was priceless , he was a GREAT FATHER!

Lavor later attended Arrow Trucking Company where he graduated at the top of his class.

Mr. Clark had a love for cars and music. As a child, he kept a collection of ” Hot Wheels.” This passion carried over into his adult life. He had a 1976 Cadillac that he wanted to make into a classic. His love for music took him on a short but memorable journey. He and his friends began the producing company, ” Get Money Records.”

The Celebration of Life for Mr. Lavor E. Clark 37 of Tulsa, Oklahoma will be Thursday, 11:00am at Mohawk First Baptist Church ,
Pastor Emmanuel Collier, Sr.
Burial will follow at Green Acres Memorial Gardens.
Public viewing will be Wednesday 03/18/15 from 10:00am until 7:00pm in the Alfred C. Dyer Memorial Chapel.