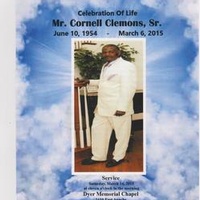 It began on June 10, 1954, when a loving baby boy was born to the proud parents , O.D.& Melissa Clemons in Forrest City , Arkansas. He was the third born of ten children from this union and was named Cornell Clemons Sr.

He accepted Christ at an early age and was baptized at Tabernacle Baptist Church under the leadership of Pastor A.A. Tottress.

Cornell along with his family relocated to Tulsa, Oklahoma where he attended Charles S. Johnson Elementary, Carver Middle School and Central High School.He graduated with the Class of 1972. After graduation , he attended ITC and became a licensed mechanic. He continued his career as a mechanic until retirement in 2010.

In August of 1987, Cornell met Rochelle Robinson who became his life partner and companion. The couple lovingly shared nine beautiful children. Cornell was a person who simply enjoyed life to the fullest. He loved everybody.Cornell enjoyed fishing , playing dominoes, riding motorcycles and having fun. He was the LIFE of the party and a true Dallas Cowboy fan

On the early morning of Friday, March 6, 2015, Cornell’s labor on earth came to an end when the Master called and said ” My Child, come home.” He transitioned from labor to refreshment to join his parents O.D. and Melissa Clemons; brother, Charles Edward Clemons and his son, Cornell Clemons Jr.