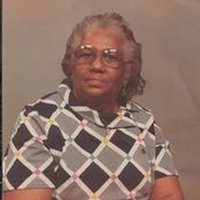 A Life Well Spent
It was a beautiful Winter day, January 2, 1919, that a cute and sweet gaby girl was boarn in
Calhoun, Mississippi, to her parents, Minnie
conners and John W. Russell. Theyh named their bundle of joy Oula Mae, she was a welcome addition to the family.

Lula rew up in Caloun Mississippi and recied all of her education there. She graduated and recived her diploma. she would later tell her family, “that receiving her diploma, was one of her biggest accomplishments.

In her twenties, Lula moved to tulsa Ok;.she later met and married Fred L. Brown, in 1930, and joined fellowship with New Bethel Baptist Church. Years later Cashenia Brown an only child was a welcomed addition to the family. Lula was a devoted member of New Bethel, she enjoyed working in the church serving as a Sunday School teacher, Bible school teacher, singing in the choirk and taking part in the Missionary Society, until her health began to fail. After being married To Fred for thirty years, he passed away.

On June 20, 1963, Lula met and married Essix Keys, they shared a beautiful life together and after 49 years of marriage Essix Keyes, passed away. Lula was a hard worker all of her life. She worked as a housekeeper for Mrs.
Avery, and Mr. Cole for fifty years, and for the Carrell family for thirty years. In her spare time, she enjoyed being part of the Travlers Group, an organizatin that traveled everywhere. Lula was a wonderful homemaker, she enjoyed baking and cooking delicious meals, quilting and gardening, and she loved spending timne with her grandchildren.