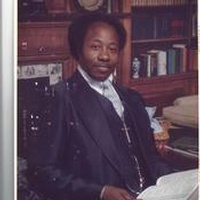 Robert E. Drew was born on October 5, 1942. He was born in Sand Town Bottle (a small balck community near Vian, Oklahoma. He was the 3rd child born of six to Mr. Charles Drew and Mrs. Edith Mary Lee W(Williams) Drew.

He grew up as a child in Ike Bain Hill. The Drew family were members of Mt. Olive Baptist Church, under Pastor Jack Brown.

He served as head pastor in different local churches thoughout the United States in such cities as McAlester and Langston, Oklahoma, also in Phoenix, Arizona and Wichita Kansas. Elder Drew also founded his own gospel group, and some with other groups bringing the word of God in song.

Robert was married in union to Swhairsawn Drew, Leatta Drew, Elaine Drew and Patricia Drew during his life time. Elder Drew retired from pastoring and moved back to Tulsa from Wichita Kansas on May 5, 2011.

Elder Drew departed this life on August 24, 2012 surrounded by his loving family.