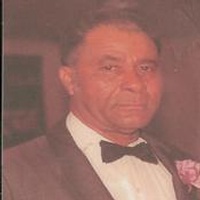 William.. Race In Life
On July 19, 1923, a son was born to Ira and Matilsa Barron in Texarkana Texas. They affectinaley named him William Baby Barron. William grew and attended school in Texarkana. williams father Ira’s family contined to grow over the years, but William was the oldes of thirteen children.

After serving in the military during World War II, he moved to Tulsa, wehre he met and married Irma jean Kempt. Thier beautifl union was blesssed with two children. In 1951, he met and married Elizabeth Jackson and to this loving union, six children were born.

William was well known in North Tulsa. His major occupation included, working as a cab driver for YOUR cab service and being a truck driver for the City of tusa Refuge Department, until he retired after many years of service in 1986. william was a friendly man, who never met a stranger.

William accepted Christ in his life at an early age. Willimas was preceded in death by his parents, five brothers, Ira, Leveste3r, Jonah, Lewis and Clarence (Happy), one siter Betty Barron Davis, and both spouses.

1 responses to William B. Barron